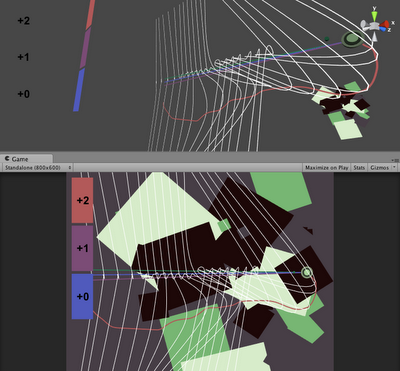 We're interested in ways of mapping race information in the post-race display. One way of doing that it to use isocron maps. The idea is that a curve is drawn that connects the positions that all players were in at a given moment. Using a series of these lines, you can get a sense of how the relative distances between players changed over the course of the race. Right now there are loops appearing, and other weird things that aren't quite right. Looks pretty though.
Posted by Tomasz Kaye at 11:50 AM No comments:

The latest build of Chalo Chalo will be playable at Copenhagen's first Local Multiplayer Picnic on November the 18th, and at the Versus event in WORM, Rotterdam on the 24th of November.

To business: Between races, Chalo Chalo players get to see their scores. Up until now, the scores have been indicated by solid blocks of colour. Something like this: 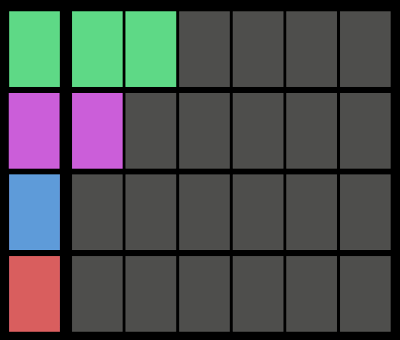 The trouble is that players can have negative scores (losing a race loses you one point), but the scheme above doesn't display any score below zero. One solution we've been talking about is to use a special symbol to indicate negative points. I've been fiddling with this approach. Visually, as soon as a symbol was introduced to indicate negative points a couple more problems became apparent: the positive point indicators were less interesting to look at than the negative indicators, and the discrepancy between abstract and representative indicators was annoying. Here's the work in progress as it stands now, using icons for both negative and positive icons. A lotus flower for positive, the frog for negative. 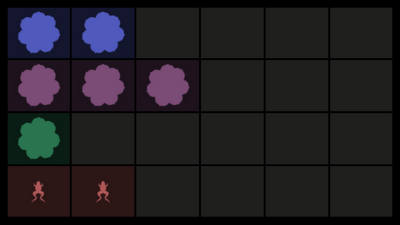 I'm not happy with it yet. I don't like the tension between the icons and the rectangles they inhabit. The grid of rectangles, on its own, divides up and 'activates' the screen space in a pleasing way, while the irregular outlines of the icons work to deny that grid. The two tendencies are battling with each other too much at the moment. Also, the dark, but coloured, backgrounds of the 'inhabited' rectangles are too similar in tone to the uninhabited squares, making the image feel fiddly. 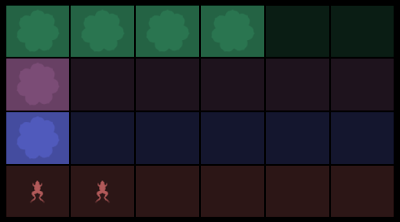 That's a bit better.
Posted by Tomasz Kaye at 12:44 PM No comments: