Photos of Chalo Chalo at Radius Festival 2015 in Vienna.

We showed Chalo Chalo at Radius Festival in Vienna. The event took place in the Ovalhalle in the lovely MuseumsQuartier. Though not very crowded, enough people showed up for quite some very fun matches with some very enthusiastic and competitive crowds.

An earlier post talks about our reflections on the event. Now an impression in pictures. 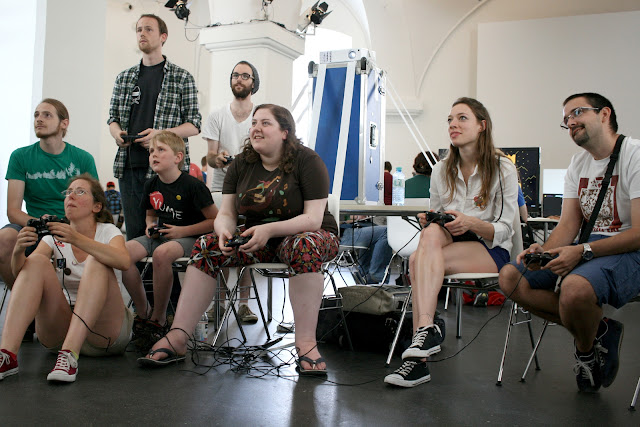 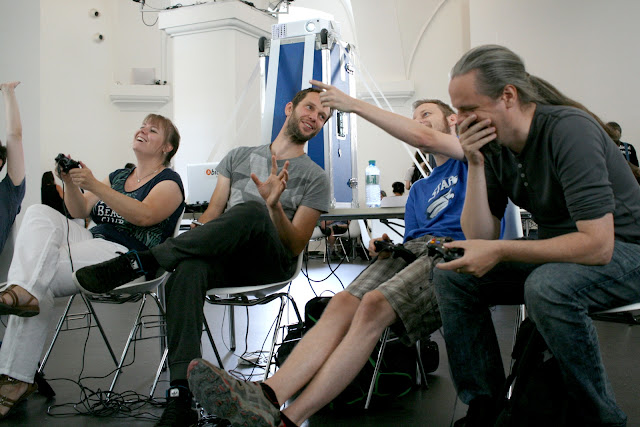 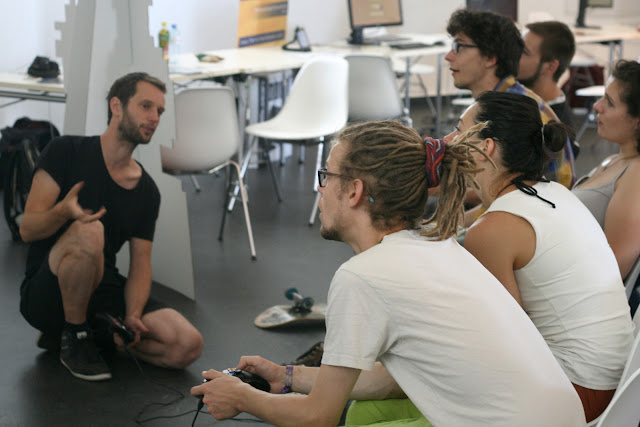 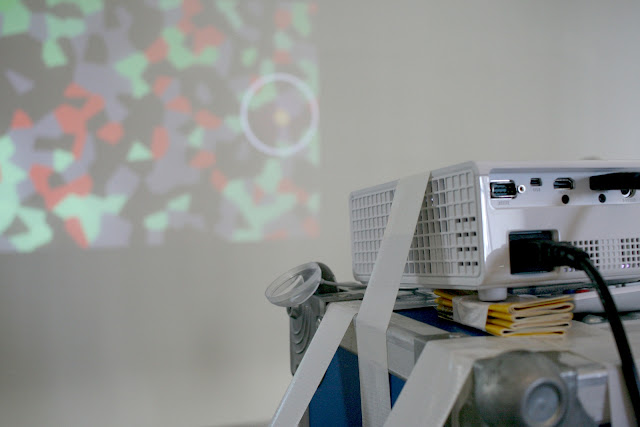 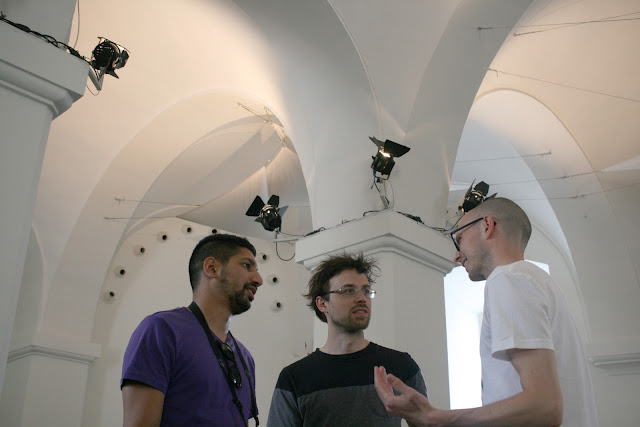 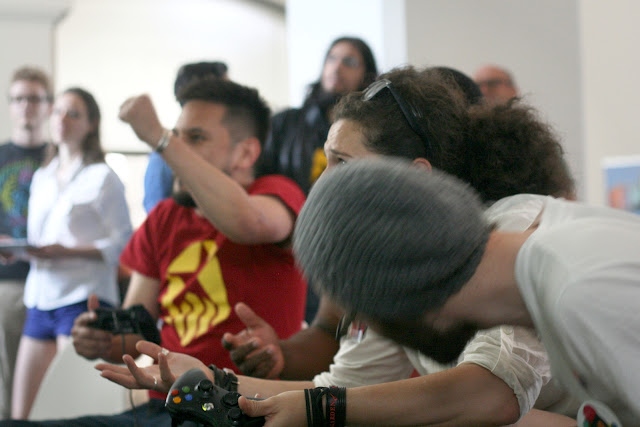 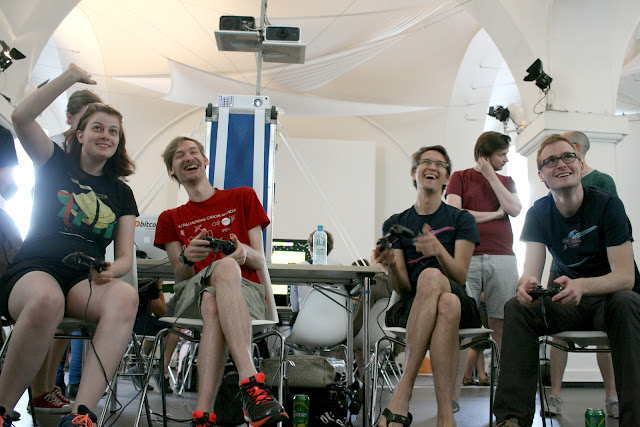 Chalo Chalo is a local multiplayer racing game in which planning ahead is more important than fast reflexes and skillful vehicle handling. You pilot a slow-moving dot towards a goal at the other side of an abstract landscape. Success hangs on your ability to figure out a faster route than your opponents.

We are Richard Boeser and Tomasz Kaye. Neither of us are prescriptive in terms of what video games should be, but when we’re making design decisions for Chalo Chalo we have our ludo-fundamentalist hats on. For us the game is primarily a contest between players that tests their skill at spatial analysis. We’re not striving for purity, but the space carved out for everything that’s not part of that core dynamic - such as the decorative elements, the suggestions of narrative and world lore - is shaped by the question ‘will this thing obscure the core mechanics of the game more than it clarifies them?’, if so then the idea gets dropped.

Transparency is very important to us. Chalo Chalo has a stark, minimal look. The game’s visual language is abstract geometry. Players and audience can see the whole race map from a bird’s-eye view. Any aspect of the game that could influence one’s odds of winning a race is made visible so it can be incorporated into players’ plans. Coloured trails make it easy to review the players’ routes, helping to understand exactly how the various terrain types affect speed and steering.

The control scheme is very simple: Any analogue stick to move. Any button to perform a context-dependent action. Likewise it’s quick to explain to a new player how to get started: Try to get to the goal first. You travel quickly on grass, slowly on tar, and ice is slippery. Don’t touch the lava!

We often see people who very rarely play video games ready to join in after watching only a couple of races. It’s very gratifying to see frowns of concentration followed by yelling - frustrated and then joyful - from people who apologised as we passed them the controller “I’m not very good at video games”.

We believe our approach avoids many potential barriers that could get in the way of new players enjoying Chalo Chalo. We’re keen to emphasize that we see this facilitation as a very different thing to design decisions that ‘de-game’ the project. For instance, we could serve up a series of flashy, superficially entertaining, events to enliven a race. But in our opinion the exciting moments of Chalo Chalo carry more emotional weight because they’re authentically the product of players’ struggle.

We’re designing Chalo Chalo as though it could be a sport. Aside from map generation, we don’t use randomness in ways that could affect the outcome of the race, minimising the importance of luck. We want the winner of a race to feel that they won in a fair competition, and losers have only themselves to blame for their defeat.

Encouraged by play sessions that attracted a broad cross-section of players, we’re respectful of the fact that non-gamer should not be synonymous with non-competitive or ‘casual’. We believe Chalo Chalo welcomes non-gamers while providing an experience deep enough for experienced players to also find a challenge in.

An appetite for competition and an appreciation for simple rule sets that allow a wide range of memorable play experiences are more widespread than contemporary game design might account for. It’s exciting to explore this territory as we make Chalo Chalo.

If you'd like to be notified when Chalo Chalo becomes available you can enter your email address into this form.

We had a fantastic time at Radius. I'll talk about some of the things specifically relevant to Chalo Chalo. 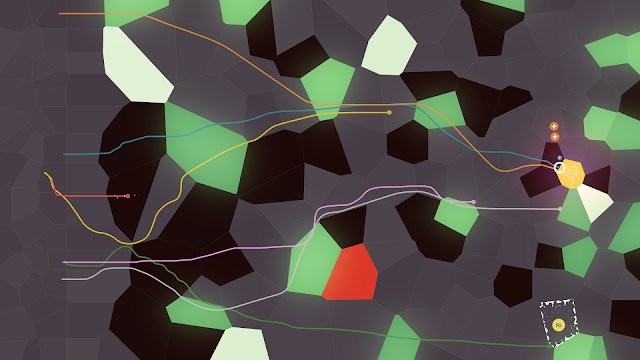 The responses to the game that we were aware of were very positive. There was lots of frowning and yelling and by the final day we had a group of regular players who kept returning to join in with new matches.

This was the biggest presentation of the game since we'd made a bunch of significant changes. Some of our players remembered previous versions and commented on the changes. The most significant among those:


Looking through the folder of of automatic screenshots, we can see that more than 622 races were played. This kind of intense use helped us spot bugs we'd missed before.
There were some moments that I expect to remember for a long time. At one point a match with many players, including Richard and myself, was underway. A young boy with blond hair and a green T-shirt sitting to my left was also playing. He was quiet throughout the game until half way through the match. He implored in a German accent "I'm yellow and I need help". The help wasn't forthcoming but he cleanly beat all of us adult players in the next race thanks to his deft deployment of the Blindfold power.

And there was the time when most of the racers in a very busy map careered down a grass path without spotting the lava dead-end until it was too late. The lone player slogging through the tar further down the screen won by default.

As usual, several people asked whether Chalo Chalo's resemblance to human reproductive biology was deliberate. The name 'Sperm Race' was suggested. We have no current plans to pursue such a rebranding.

We had some useful discussions between the two of us, and with others, about the direction of the game. Most of it validating the biggest decisions we've been making. There's still lots to do but now it's either polishing or implementing things we're very confident will improve the game, rather than things that feel risky like the recent big changes did. I have the idea that an early access release candidate isn't a million miles away any more.

Here are the bigger things we still have planned:
The MuseumsQuartier is the perfect place for the festival. It felt very comfortable to step out of the Ovalhalle after the day's exhibition was over and straight onto the square to drink a can of beer with Vienna's friendly locals and visitors.
Posted by Tomasz Kaye at 12:08 AM No comments: